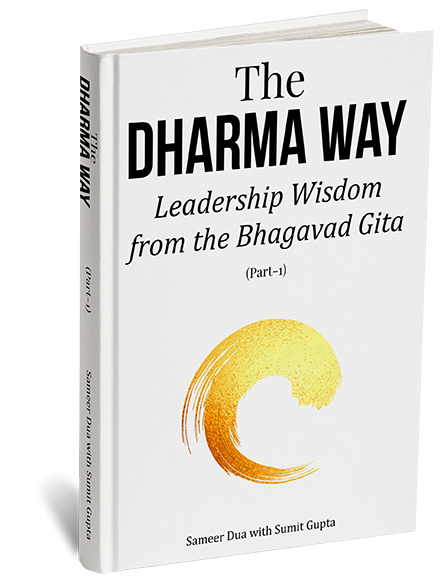 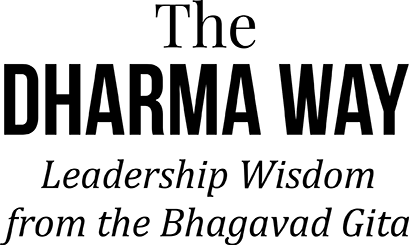 What is the Bhagavad Gita?


The Bhagavad Gita translates to “the divine song”. It is one of the oldest and most sacred books from India. It is a collection of 700 verses and 18 chapters of poetry originally written in Sanskrit. The Bhagavad Gita itself is a part of Mahabharata, which is 200,000 verses long, and is often known as the longest poem ever written.

The Bhagavad Gita is the conversation that Prince Arjuna and Lord Krishna have on the battlefield. It is a beautiful work of poetry in which Lord Krishna gives the message (to Arjuna) to follow his Dharma and fight the war, but to do so without any attachment to the results.
As leaders, we all fight our wars and struggle on the way to live a life of meaning, joy, and aliveness. The Bhagavad Gita is a metaphor for our own internal and external battles on the battlefield of life.

Lord Krishna encourages Arjuna to fight the war as an offering to his Dharma and not to exact revenge for his family, who have been duped and cheated by his relatives of their dignity and kingdom.

This is what Mahatma Gandhi has to say about the Bhagavad Gita: “A true votary of the Gita does not know what disappointment is. He ever dwells in perennial joy and peace that passeth understanding. But that peace and joy come not to the sceptic or to him who is proud of his intellect or learning. It is reserved only for the humble in spirit who brings to her worship a fullness of faith and an undivided singleness of mind. There never was a man who worshipped her in that spirit and went back disappointed.

When disappointment stares me in the face and all alone I see not one ray of light, I go to back to the Bhagavad Gita. I find a verse here and a verse there, and I immediately begin to smile in the midst of overwhelming tragedies- and my life has been full of external tragedies- and if they have left no visible, no indelible scar on me, I owe to all to the teachings of the Bhagavad Gita.”

How did it all begin?

Back when I was still living in India, I visited the UK to attend a five-day event with a top speaker. As we all would probably feel, I had high expectations from it. It was rumoured to be amazing, plus, the fact that the speaker was so well respected just added to my hopes of the knowledge I would gain from the trip. Unfortunately, I was soon to be very highly disappointed.

It became clear to me in just the first day and a half that the content being discussed in the program was very elementary. That’s not to say it wasn’t good content, it was just not at all what I had been expecting from a speaker of this stature. I decided to withdraw from the seminar as this just wasn’t the way I wanted to spend my time. Unfortunately, considering I had two full days of meetings scheduled after this event was supposed to end, I couldn’t just book a plane and hop back home.

At the time, I was staying at a dear friend’s place, and there on his bookshelf, I spotted it. The Bhagavad Gita. It was there, hidden amongst the twenty or so books surrounding it. I knew what it was about and how important it was, along with the supposed treasure horde of profound knowledge, which people read but did not necessarily understand completely due to its depth. I glanced at the cover that wasn’t unknown but wasn’t familiar either. I felt the warm orange call to me, the chariot on the paper inviting me to come sit in it and immerse myself in the conversations drowning within the pages of this divine poetry.

I accepted the siren’s call and plucked the book off its shelf to read it. I began the first page and slipped into Lord Krishna and Arjuna’s world, trying to decipher the complexities hidden in the words. Each sentence was a new thought for me to explore. I became so engrossed in it that I awoke only after three hours, left in awe.

Given my background in Generative Leadership, the scripture connected to me in different ways. The thing about the Bhagavad Gita is that the words are all about how you interpret them. How you make them relevant to your specific situation. The powerful interpretations that emerged from only three hours worth of reading made me long for more.

So, for the next three full days, I buried my head in the worn pages and did not lift it even once, my hand scribbling out copious notes for myself, only stopping for a sip of the caffeine every once in a while. By the end of the three days, I had developed an intense hand cramp, a whole load of insight, and an unusual liking for lukewarm coffee.

Those three and a half days that I spent with the Bhagavad Gita rather than the program I had originally arrived for, brought a lot of depth and thinking- something that I couldn’t wait to delve deeper into when I was back home and not on a time limit. I was so glad that I had withdrawn from the event for which I came to the UK and did not regret it even one tiny bit.

That was all in the summer of 2019 (April to be exact). By September of the same year, I had completed reading the Bhagavad Gita and making pages worth of my thoughts and notes. With all the knowledge that had been imparted on me, I couldn’t help but want to share it with other people, express my thoughts and opinions and discuss other interpretations and practical uses of the teachings.

Thus, in September of 2019, after completing the reading of the Bhagavad Gita, I decided to launch a series of webinars (we called it Series Ⅰ at that stage) of ‘Leadership Lessons from the Bhagavad Gita: A Generative Leadership perspective’

We have since had a Series Ⅱ and Series Ⅲ which have been ongoing for almost three years. The experiences I have gained from this, along with all the new conversations and lessons I have learnt will stay with me forever. And all because of those three and a half days. They are the genesis of the weekly webinars, and this book.

Sumit Gupta, a student of the Institute of Generative Leadership, a leadership coach, and an old friend of mine, reached out and suggested we convert the sessions of the webinar into a book so that we could organise it for the people that may prefer this format or want a more long lasting version of the discussions. We have retained the questions asked by the live webinar audiences at the end of each chapter.

That’s how this book took birth. And it’s how we hope several more books will soon follow from this webinar series.

Different interpretations of the Bhagavad Gita

1. You can view the Bhagavad Gita as a conversation between Lord Krishna and Prince Arjuna.

2. A second way of interpreting the Bhagavad Gita would be as a conversation that Lord Krishna is having with you.

3. And a third interpretation would be to imagine the entire Bhagavad Gita as a conversation within yourself. You can see both Lord Krishna and Arjuna as two parts of yourself who are having this conversation.